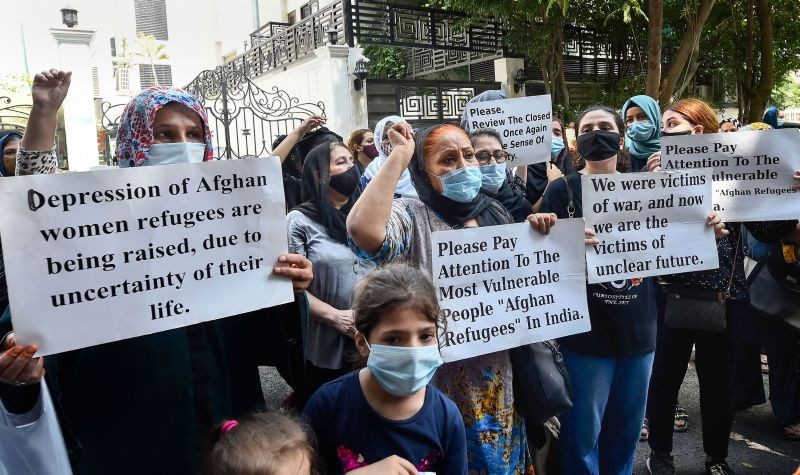 Afghan refugees demonstrate outside the office of the United Nations High Commissioner for Refugees demanding refugee status/cards for all Afghans, the option of resettlement in a third country and security from UNHCR and the Indian government, in New Delhi on August 23, 2021. (Photo PTI)

Thiruvananthapuram, Aug 23 (PTI): Afghanistan is a lesson for humanity that communal discord in the name of religious fundamentalism can burn peoples and nations and therefore we must hold humanity above caste and religion, said Kerala Chief Minister Pinarayi Vijayan on Monday.

Speaking at the virtual inauguration of the 167th birth anniversary of spiritual leader and social reformer Sree Narayana Guru, the Chief Minister said in many parts of the world that “racism, bigotry and bloodshed were endemic” and that the situation was extremely serious in Afghanistan, one of India’s neighbours.

In India too, communal hatred has arisen and all of this can be ended by embracing Guru’s message that all human beings should be treated as one and not discriminated against on the basis of caste or religion.

“Afghanistan is a lesson for humanity. A lesson in how communal discord due to religious fundamentalism can burn peoples and nations,” Vijayan said in his speech.

He said what was happening in Palestine, in the case of the Rohingya refugees and in Kashmir were examples of divisive religious fundamentalism.

“The ultimate cure for such social ills is the guru’s message of unity on behalf of humanity beyond caste and religion,” he added.

Earlier today, in a Facebook post on the 167th anniversary of the guru’s birth, Vijayan said, “It’s time to stand united to overcome the challenges posed by communal, political and capitalist ideologies that undermine fraternity and equality. may the present crisis be resolved and a new world full of peace and prosperity be established.”

He said Sree Narayana Guru’s messages proclaiming humanity rather than caste and religion should be sincerely understood and followed in present times “more than ever” for the “betterment” of society.

In his message, Governor of Kerala, Arif Mohammed Khan said, “My humble pranams to #SreeNarayanaGuru on his 167th Jayanti. With our feet firm on the noble principles advocated by this Vishwa Guru, let purity permeate our thoughts, words and deeds. ”