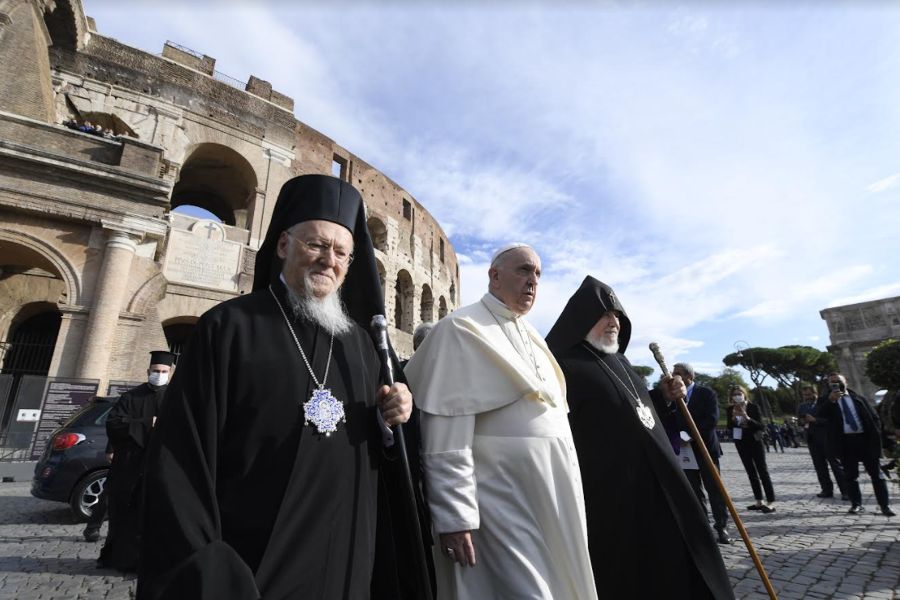 VATICAN CITY – Pope Francis called on leaders of world religions to resist “the temptation of fundamentalism” in the name of peace at an interfaith rally on Thursday outside the Colosseum.

Peace “calls us to serve the truth and to declare what is wrong when it is wrong, without fear or pretense, even and especially when it is committed by those who profess to follow the same creed as us,” said the Pope on October 7.

â€œFor peace, please, in every religious tradition, let us defuse the temptation of fundamentalism and any tendency to regard a brother or sister as an enemy.

Speaking on a stage with Muslim, Jewish, Buddhist and Hindu representatives, Pope Francis called for peace amid current conflicts around the world.

â€œDear brothers and sisters, as believers it is our responsibility to help eradicate hatred from human hearts and to condemn all forms of violence. Let us unambiguously urge that weapons be put aside and military spending reduced, in order to meet humanitarian needs, and that the instruments of death be transformed into instruments of life, â€commented the Pope.

The Pope called prayer a source of strength that â€œdisarms hearts filled with hatredâ€.

The Islamic scholar, who signed the landmark document on human brotherhood with Pope Francis in 2019, criticized the uneven distribution of COVID-19 vaccines around the world.

He said that “the world has suffered a setback despite the efforts of religious institutions, their representatives and leaders, to foster a collaborative approach and the exchange of goods, prioritizing public interest over private interests.”

Pope Francis was speaking at the closing ceremony live on “People as Brothers, Future Earth.” Religions and cultures in dialogue â€, the 35th event promoted by the Sant’Egidio community in theâ€œ spirit of Assisi â€, the interfaith gathering convened in the birthplace of Saint Francis by Pope John Paul II in 1986.

In his speech, the Pope said: â€œToday, in a globalized society which sensationalizes suffering, but remains unable to sympathize with it, we must ‘build compassion’â€¦ We must listen to others, make their suffering our own, and look at their faces.

“We cannot continue to accept wars with the detachment with which we watch the evening news, but rather make an effort to see them through the eyes of the peoples involved,” he said.

Lakshmi Vyas, President of the Hindu Forum of Europe, and Jaswant Singh, a Sikh representative, were also present.

â€œAs representatives of different religious traditions, we are all called to resist the lure of worldly power, to be the voice of the voiceless, the support of the suffering, advocates of the oppressed and victims of hatred, of the people rejected by both men and women. on earth, yet precious in the eyes of the One who dwells in the heavens â€, declared the Pope.

Pope Francis said there was a connection between the â€œdream of peaceâ€ and the need to take care of creation.

â€œBy cultivating a contemplative and non-predatory approach, religions are called to listen to the moans of mother earth, which is undergoing violence,â€ he said.

â€œThe land we inhabit bears the scars, while the air we breathe is rich in toxins but poor in solidarity. We have thus poured the pollution of our hearts on creation, â€he declared.

At the rally, Sabera Ahmadi, a young woman recently arrived from Afghanistan, read a call for peace.

â€œThe pandemic has shown how human beings are in the same boat, linked by deep threads. The future does not belong to those who waste and exploit, to those who live for themselves and ignore others, â€she said.

â€œThe future belongs to united women and men and to fraternal peoples. May God help us to rebuild the common human family and to respect mother earth. In front of the Colosseum, symbol of greatness but also of suffering, let us reaffirm with the strength of faith that the name of God is peace.

Angela Merkel also spoke at the event, which is due to step down as German Chancellor following the federal elections on September 26. She had a private audience with the Pope on the morning of October 7.

The 67-year-old, who has led the most populous nation in the European Union since 2005, has been a frequent visitor to the Vatican since Pope Francis was elected in 2013.

The Pope described the Lutheran pastor’s daughter as “one of the great figures in world politics” in an interview last month. He has received Merkel in private audience more often than any other head of state.

The two leaders spoke privately for about 45 minutes before exchanging gifts. The Pope gave Merkel a small bronze image of the holy door in St. Peter’s Basilica along with copies of her writings. She gave him three volumes on the Bible and a book on Michelangelo.

In what should be her farewell visit as Chancellor, Merkel also met Vatican Secretary of State Cardinal Pietro Parolin and â€œForeign Ministerâ€ Archbishop Paul Gallagher.

The Holy See press office declared that â€œduring the cordial discussions, thanks were expressed for the existing good bilateral relations and the fruitful collaboration between the Holy See and Germanyâ€.

He added: â€œThe parties then turned their attention to issues of mutual interest in the international and regional spheres, agreeing on the opportunity to relaunch cooperation to deal with the multiple ongoing crises, with particular reference the consequences of the health emergency and migration.

In his speech outside the Colosseum, Pope Francis said: â€œYes, let’s dream of religions as sisters and of peoples as brothers! Sister religions to help peoples to be brothers and sisters living in peace, reconciled stewards of creation, our common home.