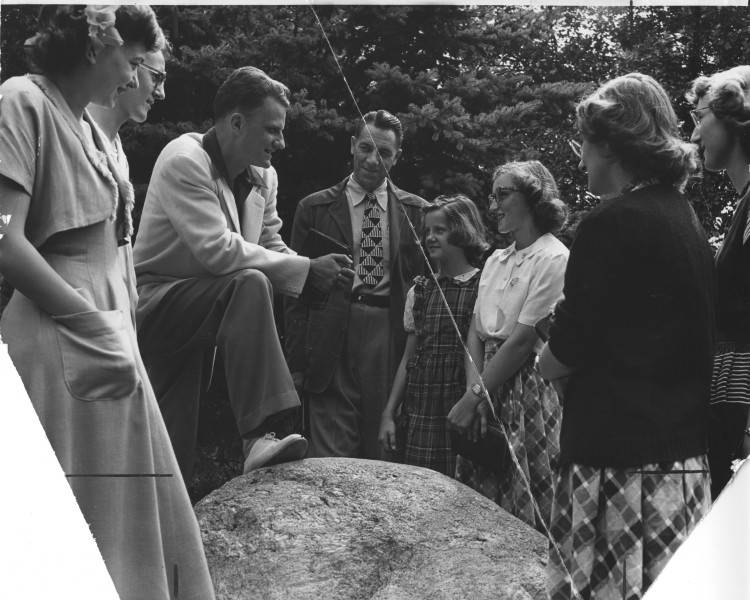 At the end of my article last Tuesday, I alluded to a brewing controversy at Bethlehem Baptist Church in Minneapolis, Minnesota. So I’m grateful to Greg Rosauer for sharing a guest post today that expands on this story and draws a useful historical contrast to an earlier incident in the same city. Greg is Associate Professor and Archivist at the Berntsen Library at the University of Northwestern-St. Paul, and a member of Trinity City Church in St. Paul, MN.

Earlier this summer, my pastor and I reflected on how Bethlehem Baptist Church (BBC) had a formative impact on us during our college years in the early 2000s. In particular, we remembered one provision to consider racial justice and justice for the unborn child as objectives that are proportionate and naturally allied. It only dawned on us years later how these themes by then-pastor John Piper formed an odd couple for many American evangelicals. So, it surprised me when Piper’s successor in Minneapolis, Jason Meyer, resigned in part over accusations that his attempt to resolve the city’s racial unrest subordinated the gospel to ideology. of social justice.

In his resignation letter, Meyer used a recent taxonomy of developing factions in evangelism to indicate that it no longer corresponds to Bethlehem. According to Meyer, the BBC and its school, Bethlehem College & Seminary (BCS), are heading towards neo-fundamentalism. Meyer isn’t insulting here, but makes a historical observation that others have seen as well. The polarizing force of national politics, compounded by COVID and racial unrest, has externalized the political and social impulses of American evangelicals. And (surprise!) Evangelicals, even very conservative ones, display different attitudes and dispositions towards culture. The label neo-fundamentalism refers to the militant mentality of 20th century fundamentalists who fought against perceived ideological and cultural threats against the gospel. Today, evangelicals and their institutions seem to sort themselves out according to their level of activism against such threats.

That this has already happened in the middle of the twentieth century is not news. But maybe I can add an observation by comparing what’s going on at the BBC and BCS right now with another church and school in downtown Minneapolis over 70 years ago.

William Bell Riley (1861-1947) was a leading figure in the fundamentalist movement of the early 20th century. He was the longtime pastor of First Baptist Church in Minneapolis and the founder and president of Northwestern Schools (a Bible college and religious seminary). A prolific author and lecturer, Riley has devoted most of his organizational and polemical skills to attacking the “threat of modernism” (that is, the encroachment of theological liberalism in denominations, schools and culture). It’s hard not to see the parallels with Piper, who also pastored a Baptist church in Minneapolis, was a prolific author and speaker, helped spark the New Calvinist movement, and founded a religious college and seminary. .

Both men were institution builders in their own way. However, the institutions they erected were / are dominated by their personalities. In Piper’s case, I think there is an awareness of the danger of personality-driven institutions, but despite her best efforts, there is no getting around the fact that the benches are filling up and the school is recruiting. based on John Piper ‘brand’. This isn’t necessarily a bad thing, but it is definitely dangerous to be an evangelical celebrity (as a certain podcast has reminded us well lately). Riley was very familiar with the power of personality-oriented movements, which prompted him to coax a young man named Billy Graham into taking the reins of his denominational school upon his death in 1947. Jason Meyer took over from Piper. as pastor of the church in 2013, not as president of the school.

But despite this difference, Graham and Meyer inherited an institution from a founding leader that was virtually unassailable and essential to his identity. And by virtue of that status in the institution / movement, Riley and Piper had a critical level of trust among their constituents that the incoming leaders did not. This trust allowed some members of the institution to downplay or deny aspects of Riley and Piper’s ministry that they were uncomfortable with. A different but glaring example of this dynamic occurred a few weekends ago when former President Donald Trump spoke at a rally in Alabama and received boos from the crowd for suggesting that they should get vaccinated. The interesting thing about this is how many otherwise staunch Trump supporters have never been on board with “Operation Warp Speed” and are now openly hostile to what Trump considers one of its main achievements.

Trump idiosyncrasies aside, I think a similar type of disconnect happened when Riley left the stage, and I suspect that’s happening now with Piper’s slow exit. The things Riley and Piper kept together in their ministries have never been comfortably reunited in the minds of their constituents.

For Riley, the point of tension was his interfaith. Although a staunch Baptist, he designed his school to be interfaith and promoted cooperative efforts in the fight against modernism. He was also not a separatist, although much of his rhetoric supported the growing impulse of fundamentalists to leave denominations tainted with liberalism. The tension between leaving or staying, fighting or cooperating animated the battles that followed within mid-century fundamentalism. Graham was a fundamentalist, but he was not “an ultra-fundamentalist fighter”. By the 1940s fundamentalism was breaking down and its most important split, neo-evangelism, was occurring within Riley’s own school. As president, Graham was influenced by Carl FH Henry and Harold Ockenga to bring Riley’s school in the neo-evangelical direction only to meet significant resistance from the “ultra-fundamentalist” separatists at the school. The militant, separatist mentality of some collided with Graham’s spirit of cooperative evangelism, making Riley’s Northwest schools ungovernable even to a man of Graham’s talent. Many of Riley’s constituents had never accepted his spirit of interfaith cooperation. They liked the way he fought, but they still suspected that Riley’s cooperative efforts would result in compromise. Graham resigned the presidency in 1952 amid accusations he compromised the gospel for the recognition and acceptance of the world.[1]

Jason Meyer’s resignation in 2021 is eerily similar. As I mentioned, Piper was well known for emphasizing issues of racial justice. It was in part a legacy of neo-evangelicals in spaces like Wheaton and Fuller (where Piper was educated). But it appears that many under his ministry were still uncomfortable with the issue of race and racism. Jason Meyer, like Graham before him, inherited an institution where ideological tensions could only be maintained by a flawless and trusted founder. A contingent of BBC members, it seems, tolerated the racial justice efforts under Piper but were always uncomfortable with them. As many pastors have discovered, 2020 has exacerbated the discomfort in discussing race. For the BBC, this unease manifested itself in open suspicion of Meyer’s commitment to the gospel, even by some of Bethlehem’s own elders. Meyer, like Graham, did not enjoy the same latitude of confidence accorded to his predecessor. In other words: Meyer cannot care about racial justice without suspecting that he is “awake”. Just like Graham could not cooperate with non-fundamentalists without suspecting himself of being “liberal”.

The difference that had separated the neo-evangelicals from the fundamentalists was not primarily doctrinal, but dispositional. In 1951, Graham attempted to temper Riley’s militant disposition by emphasizing Riley’s interfaith spirit. The “fighting ultra-fundamentalists” reversed the emphasis. “A fundamentalist,” to use George Marsden’s flippant definition, “is an evangelical who is angry with something. Meyer, like Graham, was not sufficiently militant against liberalism or revival. Hence Meyer’s feeling that the BBC and the BCS are moving towards neo-fundamentalism, that is to say a culture concerned with combating the encroachment of secular ideologies infiltrating the church and where the taking charge of needs of the broken is a subterfuge of secularization. In an ecclesial culture where compassion involves compromise, it is not enough to check all the doctrinal boxes. Compassion can sound too much like irrational empathy. The fear, sometimes rightly founded, is that if we lose our sanity, we no longer have a Christian faith.

My hope is that Christians of all stripes will throw off the burden of distrust of one another and assume the humble trust of our Lord, doing “everything without complaining or arguing, that we may become blameless and pure,” children of God without fault in a twisted and twisted generation ”(Phi 2:14 NIV).