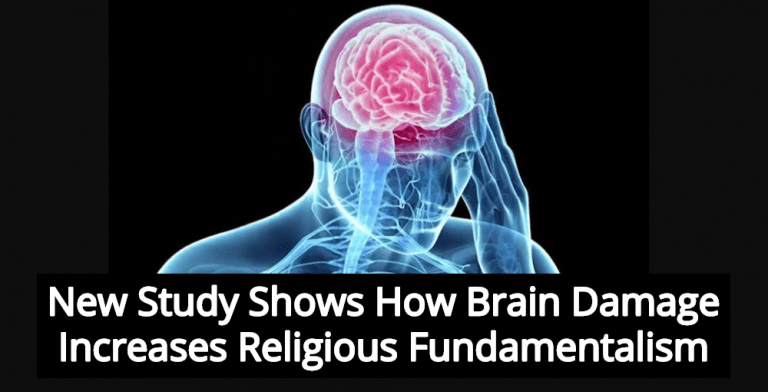 A new study in the journal Neuropsychology found that lesions in a particular region of the brain tend to increase religious fundamentalism.

A to study published in the journal Neuropsychologia showed that religious fundamentalism is, in part, the result of a functional impairment in a region of the brain known as the prefrontal cortex. The results suggest that damage to particular areas of the prefrontal cortex indirectly promotes religious fundamentalism by decreasing cognitive flexibility and openness – a term in psychology that describes a personality trait that involves dimensions such as curiosity, creativity, and open-mindedness.

The study, “Biological and cognitive foundations of religious fundamentalism, explains some general terms and information:

In general, religious beliefs tend to differ from empirical beliefs. While people may subjectively think that religious belief is a true or false representation of how the world is, it should be noted that some religious beliefs usually do not update in response to evidence, and conservatism is. particularly noticeable in the case of fundamentalist beliefs.

The study “examined Vietnam’s male combat veterans with damage to a part of the brain known as the ventromedial prefrontal cortex. They found that veterans with these lesions exhibited higher levels of religious fundamentalism than those without. “

Human beliefs, and in this case religious beliefs, are one of the storehouses of cognitive and social knowledge that set us apart from other species and indicate how evolution and cognitive / social processes have influenced the development of the human brain.

For this study, we recruited Vietnam veterans with and without brain injuries. They were all veteran American combat men. This limits generalization to other groups of people, including women, people from other countries, and people from cultures with different primary religious beliefs.

We need to understand how distinct religious beliefs are from moral, legal, political, and economic beliefs in their representations in the brain, the nature of conversion from one belief system to another, the difference between belief and action, and the nature of the depth of knowledge that individuals use to access and report their beliefs.