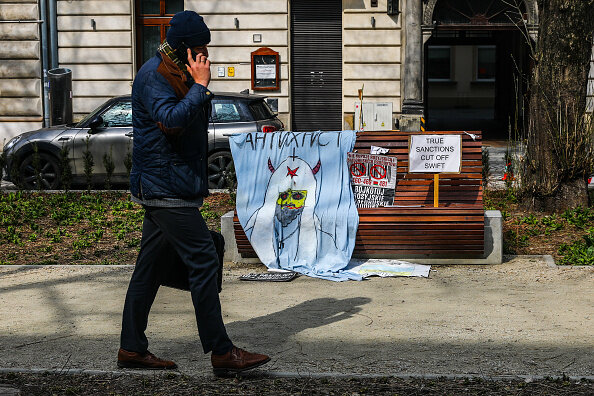 As the Ukrainian crisis shows, God’s law can often be abused by man. Jesus, through his own suffering, understood this better than anyone.

On Maundy Thursday evening, our village church held the ancient Tenebrae (“darkness” or “shadows”) service. It is a lamentation for the three days before Easter, the days when Jesus sat at the Last Supper with his disciples, was betrayed, taken, falsely accused, judged and crucified. After the recitation of each psalm or other passage of the Bible, a candle is extinguished until, at the end, the church is plunged into darkness.

After the third candle had been extinguished in our parish church, came the opening of Jeremiah’s Lamentations: “As the city sits alone,” said the translation used, “which was once full of people!” How she became a widow, she who was great among the nations! She who was a princess among the provinces has become a vassal. She cries bitterly in the night, tears on her cheeks. The city in question is Jerusalem. This week, however, it’s impossible not to also think of Mariupol, which is still fighting – just – as vassalage swoops down.

One of the many heartbreaking aspects of the war in Ukraine is the way the aggressor invokes the Christian God. Vladimir Putin is dishonourably encouraged by Kirill, the Patriarch of Moscow, who praised President Putin’s “high and responsible service to the people” at the start of the invasion. He seems to believe that only the “Russian world”, as opposed to all of humanity, has been redeemed.

Next Sunday [24 April], is the Orthodox Easter. If security allows him to show his face, I expect Vlad to honor Kirill’s Easter Eve Mass in Moscow as he did last year. On this occasion, he held a candle, crossed himself and sat alone high up, away from the rest of the congregation, in order to emphasize his eminence and reduce his risk of Covid infection.

For many, this association between priest and pseudo-prince is proof that religious belief is useless, or worse than useless. Either religion’s exhortations to virtue have no effect, they say, or they are lies used to disguise the habitual power impulses of human beings. The world is full of examples, after all, and not just in Christianity. In modern times, the phrase “Allahu akbhar!” (“God is great!”) has sadly become more familiar to non-Christians as the cry uttered by Islamist terrorists just before they attack their victims.

Many non-believers, of the reasonable majority who do not automatically despise the motives of religious people, will tend to agree with our greatest Labor Prime Minister, Clement Attlee. Raised in a deeply Christian family, Attlee retained the moral seriousness he had imbibed, but rejected the belief system that underpinned it. As he said, with characteristic terseness, in an interview at the end of his life: “Believe in the ethics of Christianity. I can’t believe gibberish.

It is perhaps a sort of response to the anti-religious to point out that the most famous victim of this murderous zeal and self-righteous delusion was Jesus himself. The specific reason he was crucified was his alleged blasphemy. It was the chief priests who called for his death. The secular Roman authority, Pontius Pilate, simply acquiesced, presumably for a quiet life. Jesus understood better than anyone how the law of God can be abused by man. He knew he would die of it. This knowledge led him not to reject religion, but to purify it.

However, Attlee’s point about “gibberish” still needs to be addressed. After all, it is obviously true not only that many religious people are very bad, but that many non-believers are very good. I wouldn’t go so far as to say that believers are on average worse than non-believers, but it is obvious that some believers are blind, in a special, falsely holy way, to the nature of humanity. Dark Jeremiah (again) is right: “The heart is deceitful above all else, and hopelessly wicked. Nothing is worse for the character than to believe that you, unlike most other mortals, have been saved and are therefore virtuous no matter what you do.

Wouldn’t it be better, therefore, for everyone to just follow decent moral codes and keep God away?

It’s a good question, but it assumes something that shouldn’t be assumed. How are decent moral codes born? It takes a fairly narrow rationalist to take them for granted.

Even before Charles Darwin produced scientific evidence for the survival of the fittest, the natural tendency of most people was to put self-interest first. The ultimate logic of this leads, as in the animal kingdom, to the strong killing the weak without scruple, getting rid of those who are considered too old, or “defective” in mind or body, or because they belong to a race, nation or class. seen as inferior.

The assertion of power often turns into an assertion of right. The killing of all Jews was called the “final solution” by the Nazis because it presented itself as the correct scientific answer to a “problem” – what Hitler saw as the inferiority of the Jewish race. In the early 1930s in Ukraine, Stalin defined and stigmatized a class of people called “kulaks” (prosperous bourgeois peasants). The kulaks were “foreign elements” who would corrupt the pure proletariat of the Marxist revolution, Stalin claimed, so he imposed a policy of deliberate starvation on them and stole their lands. Millions died. Putin is indeed Stalin’s heir, especially when it comes to Ukraine, although he invokes Holy Mother Russia rather than the Communist Manifesto.

Against such horrors, decency is necessary, but not sufficient. On his own, he cannot see the terrible force of evil and therefore does not know how to confront it. Without faith, he has no way of explaining the truly terrible things that people do. It lacks the imagination to confront the paradox that religion understands so well – that all human beings are sinners, but none are hopeless.

The response of what might be called a merely honest person when faced with extremes of human wickedness is to think that there must be some kind of misunderstanding that can be dispelled. Hence the propensity of international bodies to see in ceasefires, “humanitarian corridors”, aid agencies, “peace initiatives”, etc., solutions in themselves rather than potentially useful instruments. . Decency is a wonderful disposition, but it is no way to understand the world.

The major religions and – I would say – especially Christianity, understand much better that life is not a series of problems that will eventually be rationally solved by gaining more knowledge. If that were so, the most educated people in the world would be the best (a heresy which I fear is widely accepted by the most educated, especially the “experts”). No, human life is a difficult situation, tragic because of the gap between what it could be and what it so often is, but also full of hope.

It is therefore no coincidence that believers mainly belong to groups traditionally considered relatively powerless – the poor more than the rich, the women more than the men, the weak more than the strong. Nor is it a coincidence that the man who said he had come to redeem human misery did not do so by conquering other people’s countries or by becoming very rich or even by writing a great work of philosophy, but by suffering and overcoming rejection, injustice and death. I can see why that’s hard to believe, but it’s not.

Found a spelling mistake? Let us know – highlight it and press Ctrl+Enter.

Religious belief is no guarantee of human decency – but it’s not gibberish either.

Fundamentalism is more dangerous when practiced by the majority than by the minority: Kerala minister, MV Govindan