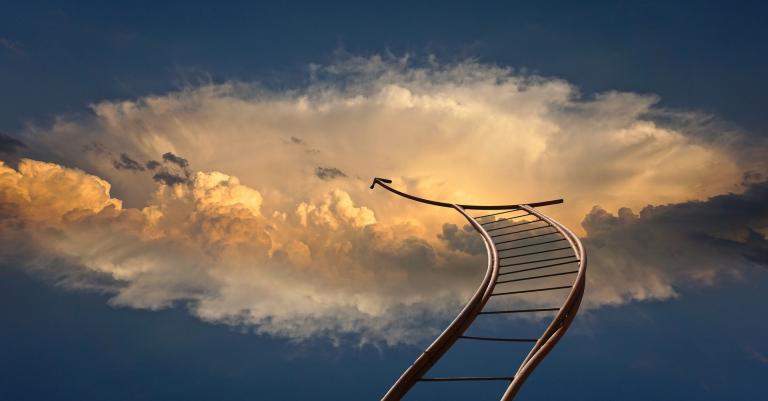 The religious dilemma: fundamentalism or mysticism (the road less traveled)?

(A) The origin of religion

I have never found a satisfactory definition of religion, although I am certain of its origin, which I consider to be the impulse of the mind. However, humans have a penchant for screwing up all big ideas. The least lethal blunder, perhaps, is to let the momentum stagnate theologically; and the deadliest thing is to arm it.

Religion has many aspects and serves many purposes, for example, it creates community, formulates ethics, and designs rituals. All of these are essential to the life of the “tribe” (regardless of the size of the tribe). The community must both support and challenge the theological thinking of its members; but, frequently, the community deteriorates into a simple institution which inevitably is taken over by an oligarchy. Soon, orthodoxy becomes the ultimate criterion of holiness; and heterodoxy (as defined by the oligarchy) is punished by avoidance. If heterodoxy, God forbid, is to stray into heresy or, horribly dictu, blasphemy (again as defined by the oligarchy), then avoidance is turned into inquisition, torture and execution – all to protect the thin-skinned holiness of the curvy. – divinity of form. If the institution has enough clout – and if it has become a theocracy, then it already has the clout – then, after dealing with internal dissidents, it now turns its face and its weapons towards conversion or extermination. pagans / infidels / barbarians / gentiles who live outside its sacred gates.

Eventually, a new prophet will emerge from its ranks to remind the group of the intentions of its founder. And the age-old model for dealing with the prophet is to first slander, then imprison, then execute, and finally call a street after him (eg, Martin Luther King Jnr. Highway) or create a day of feast in his honor. In no case, however, can his unredacted teachings be allowed to flourish. Instead, a sanitized and disinfected version is presented as a moralizing pablum to numb the masses to the prophet’s true message.

And as the original religious community becomes a self-defense group, the ethical primacy of love (don’t do to others what you wouldn’t want them to do to you) has given way to the canonization of the law (in the strident words of Maggie Thatcher, “the law is the law is the law!”) The promulgation, imposition and sanctioning of breaches of a legal code become the primary moral tools.

And the rituals that initially were the practices (e.g. sound / music, dance / processions, art / stained glass, perfume / incense, taste / communion, meditation, etc.) intended to create altered states of consciousness, in order to to encourage encounters with extra-dimensional energies and entities have now become dead rites that stifle mysticism and replace it with dogma.

By then, religion, instead of being a stage in the evolution of mankind, has disintegrated into the materialized and unchanging “revealed” will of an irascible God. For this stagnation to last, however, history must either be ignored or rewritten.

An Indian mystic once said that if you come across any religion’s footsteps in the desert, you must follow them; but not where they lead, but rather where they come from.

(B) The periods of the journey

Religion should be the driving wheel of spirituality – to be discarded once the practitioner has developed the ability to go it alone. This does not mean that the community is no longer important. He is. But its function is no longer to collect and censor; it is to provide encouragement and challenge for the individual and mystical journeys of its members. The “marm school” approach must give way to the Socratic method; mother should allow children to cut social / religious umbilical cords and steal.

When homo sapiens sapiens first developed language around 70,000 years ago and learned to manipulate symbols intracranially, one of the first uses of this newly emerged skill was to think about existential questions, for example: who “did” all this? What happens after death? Is there a purpose or a pattern for our world and our lives? I believe the process goes through four main stages.

It was first the era of theologians, where we started to talk about God (or gods.) It’s a bit like modern people who are fascinated by the life of movie stars, whom they will never actually meet. Then came the era of priests; “Experts” who, having discovered what these gods are, began to contact them. It is the era of speaking to the gods. It gave birth to prayer, sacrifice and rituals.

Era three is the time of the prophets; those who claim to speak IN THE NAME of the god. Their function is to establish alliances with their god of choice. This involved monolatry (the worship of a particular god) but not yet monotheism (the belief that there is only one God). After establishing the covenant, the prophet’s task is to continue to call the wandering population into alignment with it. Its function is not so much to predict the future as to to prevent this; not to predict he but at get ahead this. Because the future is almost always a dire and punitive situation created by the sinful ways of humans and the jealous and impatient ways of the god.

The final era is that of the mystical, who does not speak of, not to and not in the name of but, rather, as God. This is the stage of realizing that only God exists and that we are holographic fractals spun into incarnation, so that God can temporarily experience Self-alienation. Mystics are no longer interested in being inconspicuous, permanent waves on the beach, but rather see themselves as temporary manifestations of the ocean.

There are several kinds of divine language. Theologians debate how many angels can dance on the head of a pin. They have spent years in the great councils of the Church defining, in exquisite detail, the one and three-person nature of the Christian God. The Great Schism of 1054, and the resulting bilateral massacre, was sparked by a disagreement over a single Latin word, “Filioque” (rendered in English by “and of the son.”) This dispute in a creed formulation, has lasted nearly 1,000 years! The kind of theological language used to explain God is called cataphatic.

On the other hand, the language of the mystics, if they choose to speak (Lao Tzu once said, “those who know, do not say; and those who say, do not know”) is apophatic Language. Rather than claiming that God is X or Y or Z – as theologians do – mystics use “Neti!” Neti! (Not this! Not that!) Since God is totally beyond human comprehension and the experience of God is ineffable, we can only retreat into realization by becoming trans-rational and severing all ties. anthropomorphic. Hence the enigma of Zen koan, for example “what is the sound of a hand clap?” “; of “I pray to God daily to get rid of God” by Meister Eckhart; and “If you meet the Buddha on the road, kill him” Buddhism.

Teachers, however, have a problem. Despite Lao Tzu’s statement, they are responsible for trying to inspire. To avoid the cataphatic trap and temporarily avoid taking refuge in the apophatic, they must resort to the symbol – stories, parables, proverbs, aphorisms, metaphors, analogies… The listener’s trick is to engage the symbols at the level of the soul not the spirit. It is above all to avoid the pitfall of literalism. But we have a very uneven track record in this regard. When we speak of Jesus as “the Lamb of God”, no one thinks that he is walking on two legs, but when we speak of him as a judge or a king, we take that as descriptions. literal. Thus, Christianity has succeeded, at times, in converting a compassionate avatar into a despotic psychopath.

Jesus chose to speak only in parables (rather than in theological, philosophical, or scientific language) precisely because he did not want his message to be weeded and watered in the virgin womb of the human soul.

The return journey should be from religion to spirituality and, finally, to the mystical union with Source. Unfortunately, the process frequently recedes; instead of reaching for spirituality, religion can disintegrate into fundamentalism. When a religion is hijacked by the ego of a leader or an oligarchy, it tilts into fundamentalism and stagnates. Fear and cowardly obedience become the basis of his relationship with God; law and dogma the basis of its relations with its own members; and prejudice and xenophobia the basis of its relationship with “others”.

Fundamentalism then becomes the antithesis of mysticism. In four quick steps, it first reduces complex ideas, like God or nationalism (the secular version), to a few lines of stickers that even the dumbest of us can relate to. Second, it identifies or fabricates an “enemy” who poses a threat to a decent life, democracy or “truth”. Third, the enemy is dehumanized so that the extermination is in fact pleasing to God. And the last step is to embark on the massacre.

Mysticism does the exact opposite. Its first step consists in passing from cataphatic language to apophatic language; realizing that one cannot speak of God in human terms, and that attributing characteristics to Him is human pride in the broad sense. The fear of the mystery, not reducing it to an effigy, is the only answer to the mystical experience. The second phase is to realize that everyone is my neighbor; recognize that all sentient beings are sister and brother to me. Third, instead of dehumanizing “the other”, we deify him. We offer them the “namaste” (the divine in me recognizes and honors the divine in you.) And, finally, we reach out, not in war but in unconditional love.

The temptation of religion is to lock the gear lever of the transit vehicle in neutral, stop, and snuggle up safely on the bus; the insight of mysticism is to go out and walk.